Meanwhile, in an alternate universe… (5)

King Darragh III of Ireland: “There’s no more room on the flag for the Scots anyways, the blue from the coat of arms of Ireland is already in use.” 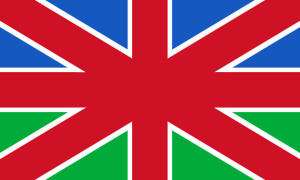 The current Union flag since 1699

Where to begin, really? I was triggered by the fact that Scotland may want to leave the Union for real. So what about Scotland never actually entering the Union in 1707. From there I got a bit carried away: Queen Elisabeth II would not have been queen for numerous reasons. One being the fact that King James would probably not have been king of England. And subsequently I got carried away even further and let Ireland still be a kingdom instead of a republic. Maybe it’s all a bit far fetched, but come on: it’s an alternate  universe what would you expect!